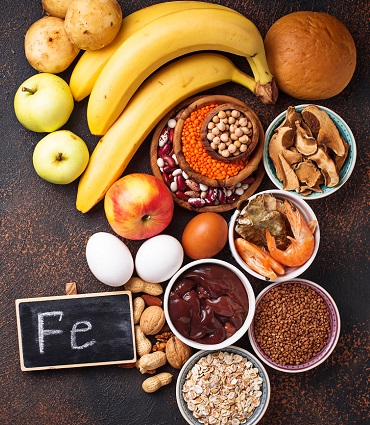 At the beginning of the 20th century, the French chemist Gabriel Bertrand conducted experiments that demonstrated that iron, along with other minerals, is present in the body in very small quantities and yet is essential for human health.

In the diet, iron is present in two distinct forms: haem iron and non-haem iron. The former is found in animal products and the latter mainly in plants. Contrary to popular belief, spinach contains relatively little iron, with between 2.5 and 3 mg of iron per 100 g.

For our bodies, this distinction makes sense because the body absorbs heme iron from meat products much better than non-heme iron from plant products.

An adult man or a post-menopausal woman should have a daily iron intake of about 9 milligrams. A teenager will need 13 milligrams, about 50% more, and a woman of childbearing age will need even more. However, the need for iron is particularly high during pregnancy, when the daily requirement is 25 to 35 mg. This explains why additional iron is often more than necessary for pregnant women.

In the United States and Canada, certain refined products such as wheat flour, breakfast cereals, pre-cooked rice and pasta are fortified with non-haem iron to prevent potential deficiencies.

The THERASCIENCE Laboratory has chosen to use iron in the bisglycinate form, which is best absorbed by the body. Indeed, iron bisglycinate offers greater safety and efficiency, better bioavailability and higher absorption than the sulphate form.

Our products based on Iron