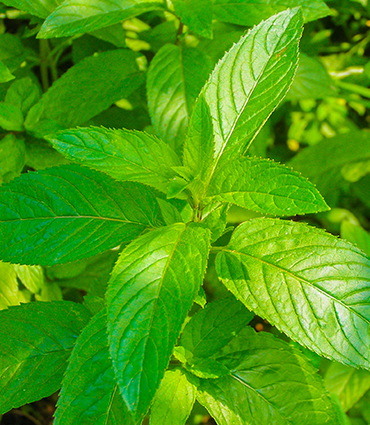 Mint takes its name from Greek mythology, which tells us that a nymph named Minte was the lover of Hades, the god of the Underworld. This relationship provoked the fury of Persephone, the wife of Hades, who in revenge transformed the young nymph into a mint. Hades then gave the mint a heady scent that would forever remind him of his passion for Menthe.

Peppermint, Mentha piperita, is a plant resulting from a cross between water mint and field mint.

Used in phytotherapy for its aerial parts, peppermint contains an essence from which the essential oil is derived. The latter contains ketones (menthone), molecules with digestive properties, as well as monoterpene alcohols (menthol) with tonic properties.

Peppermint is also composed of antioxidant flavonoids as well as phenolic acids and tannins. Rich in antioxidant vitamin E, vitamin C and vitamin B9, peppermint also contains minerals and trace elements such as iron, copper, magnesium, manganese and potassium.

This plant has digestive properties. It has an antispasmodic and muscle-relaxing effect and regulates the emptying of the stomach. Peppermint facilitates the production of bile (choleretic action) and acts against bloating (carminative action). In addition, the flavonoids contained in the plant reinforce its antispasmodic activity.

In phytotherapy, peppermint is neuroprotective, but also antiviral and antioxidant. Furthermore, peppermint essential oil can be used in case of migraines.

Peppermint helps support healthy digestion and contributes to the normal functioning of the intestine. It also promotes relaxation and the body's natural defences.

Peppermint is the object of more than 1422 scientific publications.

Our products based on Peppermint