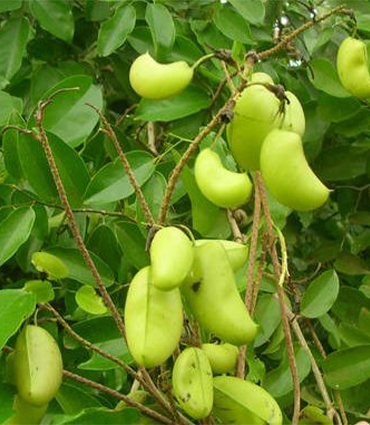 This liana, native to West Africa, is used in traditional medicine for the aphrodisiac properties of its leaves and stems, but also for their anti-vomiting and anti-diarrheal effects.

Griffonia, a climbing plant of the Fabaceae family, can reach a height of 3 to 10 metres. Its fruit (one pod) contains 3 to 7 seeds containing alkaloids such as griffonine and hyrtioerectin, but also indole derivatives, including aspartic acid and 5-hydroxy-tryptophan (5-HTP). 5-HTP has good bioavailability, allowing it to cross the blood-brain barrier when consumed.

In the body, L-amino acid decarboxylase converts 5-HTP into serotonin (a neurotransmitter in the central nervous system). An abnormal level of serotonin can cause migraine headaches, anxiety and even depression.

Griffonia is beneficial to health thanks to its anxiolytic properties. In particular, it helps to reduce panic states and to combat depressive states. Griffonia also helps in the fight against compulsive eating disorders (bulimia). It can be used in cases of fibromyalgia or to improve libido.

Giving this plant its full potential, griffonia seeds contain large quantities of 5-HTP (5-hydroxy-tryptophan), an immediate precursor of serotonin (a neurotransmitter). Griffonia is used in phytotherapy to stimulate brain activity. It also has an action on the nervous system and on mood disorders. Griffonia is beneficial against stress, nervousness and anxiety, but also in cases of depression.

Our products based on Griffonia