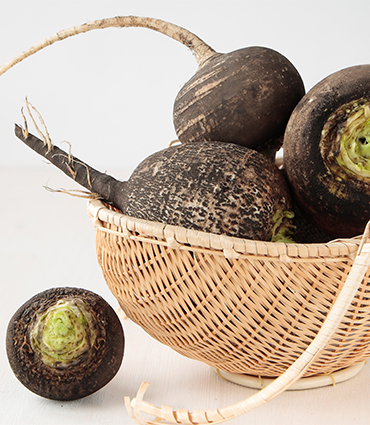 Part used of the plant:

The black radish is a plant of the Brassicaceae family. Its root is used in phytotherapy, but also in various recipes. Black radish has many health benefits, so much so that it was used as a currency in ancient Egypt. Its fame has even led to its representation among the hieroglyphs of the temple of Karnak.

Black radish has a detoxifying action on the liver, helping to eliminate xenobiotics from the diet. In addition, this root favors the secretion of bile by the liver (choleretic action) and provokes the emptying of the gall bladder (cholagogue action).

In addition, black radish has digestive virtues and contributes to the proper functioning of the metabolism. It is lipid-lowering, i.e. it contributes to the reduction of cholesterol, and has a gastroprotective effect by stimulating the secretion of mucus. In addition, black radish liquefies mucus and has an expectorant and antitussive activity. It is also anti-infectious (with activity on Helicobacter pylori), antioxidant and anti-inflammatory.

Our products based on Horseradish