Who has never experienced a period of stress? The files that pile up and the new projects that follow without warning can leave you with a feeling of being underwater. Stress is an archaic reaction, inherited from our Homo sapiens ancestors. This physiological reaction enabled them to flee from danger. Because of modern life, stress phases follow one after another in an uninterrupted manner. Thus, the stress settles in and leads to what is known as "chronic" stress.

The beginning of the school year is a well-known stress phase. Especially since certain parameters can reinforce its anxiety-provoking aspect. This is particularly true due to the inflationary economic context, the unstable international geopolitical situation (war in Ukraine and nuclear threat), and the possible resumption of the COVID-19 epidemic.

As stress and magnesium are closely linked, a magnesium intake is recommended and may even be indispensable.

Magnesium (Mg2+) is a mineral present in abundance in the body and is an essential trace element for the proper functioning of many enzymatic reactions.

Moreover, magnesium participates in the release of neurotransmitters such as GABA (gamma-aminobutyric acid): an inhibitory neurotransmitter of the central nervous system, and serotonin: "the happiness hormone".

However, it is well known that a lack of magnesium can lead to fatigue, irritability, anxiety, headaches, high emotional reactivity and insomnia. At the neuronal level, the presence of magnesium limits excessive neuronal activity, which is responsible for the symptoms mentioned above.

Magnesium also plays an important role in the transmission of nerve impulses. A magnesium deficiency causes neuromuscular hyperexcitability characterized by pain and tremors, as well as tingling in the extremities (hands and feet) and cramps. Sensations of oppression accompanied by palpitations can also be felt.

Magnesium and stress are closely linked in a vicious circle. While stress is responsible for the loss of magnesium, the decrease in its concentration in the body itself causes an increase in stress.

Actually, during periods of stress, the body produces two hormones :

Also called "stress hormone", cortisol is involved in increasing blood glucose levels to provide energy to the brain. This hormone is notably synthesized by the adrenal glands. Once the stress peak has passed, a hunger signal is emitted to replenish energy reserves for the next peak. This explains why when we are stressed, we are likely to gain weight.

Preparing the body to respond to stress, this hormone induces an increase in breathing and heart rate.

In response to these two hormones, calcium enters the cells in high amounts, leading to the contraction of the muscles. As a result, magnesium is released from the muscle cells and then eliminated from the body via the urine. A magnesium shortage increases stress sensitivity. You go back to where you started, having lost magnesium and increased stress. The situation will then continue to worsen. 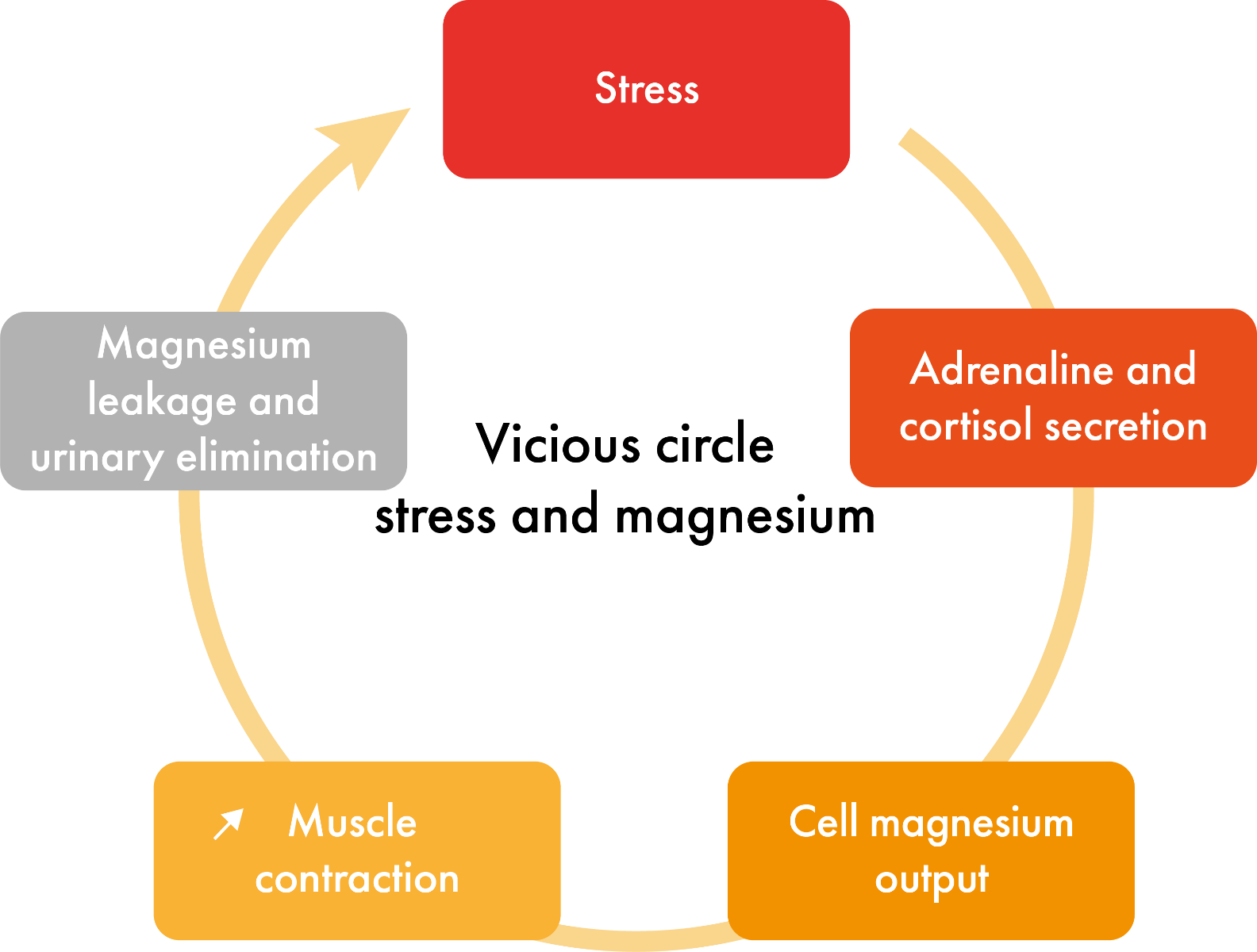 Three parameters must be taken into account in order to maximize the benefits of magnesium :

Thus, even if high magnesium contents lead one to think that the formula with the highest content is potentially the best, if the magnesium is not or poorly absorbed and if digestive problems are added to this, which will themselves lead to a leakage of magnesium and other trace elements, this magnesium will not provide a solution and will therefore be of no use.

Zoom on the different forms of magnesium

In food supplements, magnesium is often associated with a salt or a chelate. Its assimilation depends on the form in which it is provided.

Also called first generation salts, inorganic salts correspond to the association of magnesium with another mineral such as chloride, carbonate, hydroxide or sulfate. These forms have laxative effects and are poorly assimilated by the body. Indeed, once in the colon, the inorganic salts of magnesium capture water : it is the osmotic effect. The presence of water in the colon makes the stools liquid, causing diarrhea.

What about marine magnesium?

Marine magnesium is a combination of magnesium oxide, sulfate, hydroxide and chloride. It is therefore only a mixture of inorganic salts. Consequently, the emphasis on the naturalness of this magnesium is not sufficient to justify its effectiveness. Indeed, even if its magnesium content is important, the absorption and digestive tolerance of each of these forms taken separately are already not optimal, the mixture of these different inorganic salts will certainly not remedy the problem.For example, the frequency of diarrhea after supplementation with 400 mg of magnesium for 28 days in the sulfate, chloride, oxide and hydroxide forms is high, at 96, 78, 47 and 45% respectively.1

Organic salts combine magnesium with an organic acid such as glycerophosphate, citrate, malate or lactate. The latter play the role of magnesium transporter. These forms of magnesium combine very good bioavailability and good digestive tolerance for optimal effectiveness and digestive comfort. On the other hand, in certain cases, the consumption of organic salts is not the best choice. This is particularly the case with magnesium lactate. Lactate is a metabolic molecule that is produced during exercise and physical exertion. Its accumulation in the muscles is likely to induce muscle soreness but also to cause diarrhea with a frequency of 32% after 28 days of supplementation with 400 mg.1 Moreover, magnesium lactate could itself promote anxiety.

These forms, also called "amino-complexed", correspond to the association of magnesium with amino acids. This is the case with bisglycinate, which is associated with two glycines, non-essential amino acids with a calming effect on the body. The glycines stabilize the magnesium and make it ionically neutral. Thanks to its binding to these two molecules, magnesium has the advantage that it does not break down in the stomach, is transported intact to the intestine and does not react with other vitamins and minerals. Like organic salts, chelated forms have a very good bioavailability as well as a very good digestive tolerance. 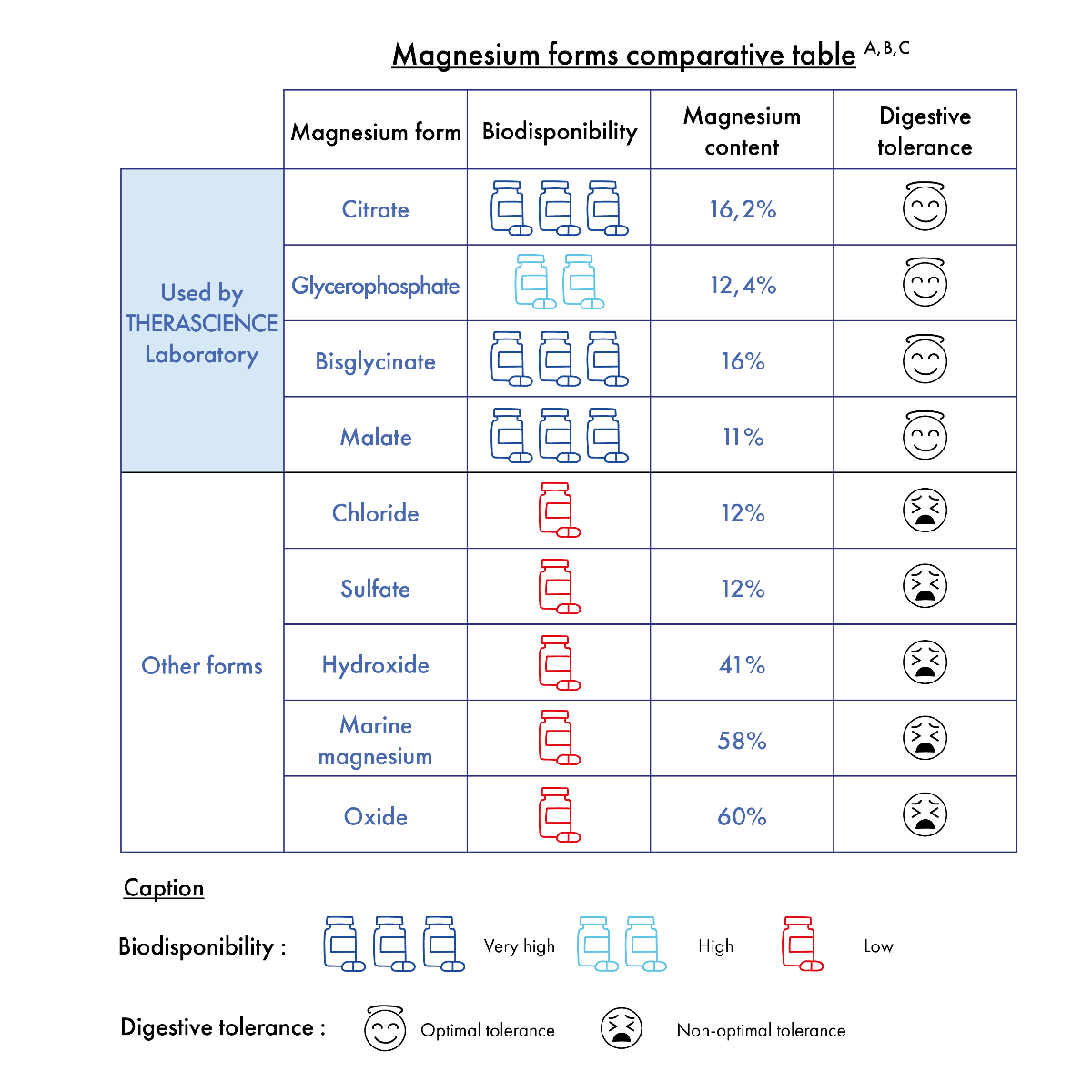 The forms of magnesium used by THERASCIENCE Laboratory

In order to maximize the effectiveness of magnesium, THERASCIENCE Laboratory has selected the most bioavailable forms known to cause the least digestive problems. This is why we use organic salts such as citrate, glycerophosphate and malate, as well as chelated forms such as magnesium bisglycinate.

During periods of stress, the loss of magnesium leads to an acidification of the body. By exerting an alkalizing action, magnesium citrate helps to put the brakes on the vicious circle of stress.

The glycerophosphate form is particularly interesting for its rapid action. It is therefore appropriate at the beginning of a treatment in case of immediate need. The frequency of diarrhea after a supplementation of 400 mg/day of magnesium glycerophosphate administered to volunteers for 28 days, is 7%, i.e. as much as in people who received a placebo.1

The bisglycinate form is highly bioavailable, which allows a significant assimilation by the body. Its high solubility and good digestive tolerance make it a particularly remarkable form.

THERASCIENCE Laboratory also uses magnesium malate. This form is ideal for stimulating intracellular energy. It is also involved in the detoxification of heavy metals.

Magnesium, taurine and vitamin B6 : The association to fight stress

As you can see, some forms of magnesium are more bioavailable than others. Since 98% of the body's magnesium is found in the cells, it is possible to influence two parameters in order to maximize its benefits : to facilitate the entry of magnesium into the cells and to avoid its exit. For this, vitamin B6 and taurine are two ideal and indispensable molecules.

These two molecules exert a "magnesium-binding" power, i.e. they contribute to the binding of magnesium in the cells, thus avoiding its exit.

Vitamin B6 also facilitates the entry of magnesium into the cells. Moreover, this vitamin is essential for the synthesis of cysteine, an amino acid precursor of taurine.

Taurine participates in the transport of magnesium into the cells. Moreover, it intervenes in the reduction of the secretion of adrenaline, hormone implied in the stress vicious circle. Because of its common use in energy drinks, taurine has an unjustified reputation as an exciting molecule. This property is actually due to the presence of caffeine and the high sugar content that characterize energy drinks. So don't panic, taurine will not induce excitement or nervousness.

Food supplements in drinkable form allow a faster absorption of the active ingredients as well as a faster action compared to solid forms (tablets and capsules). Thus, the presence of bioavailable magnesium, associated with taurine and vitamin B6 is the royal road to end the reign of stress.

To provide highly bioavailable magnesium and act quickly against stress, PHYSIOMANCE Relax Booster associates 4 bio-actives offering a synergic action : taurine, vitamins B6 and B5, as well as magnesium glycerophosphate and citrate, forms presenting an optimal absorption and digestive tolerance.

A stick of PHYSIOMANCE Relax Booster to be diluted in 100 mL of water, associates 300 mg of magnesium, 150 mg of taurine, 33% of the RI (Reference Intake) in vitamin B5 and 100% of the RI in vitamin B6, in coenzyme form, for an optimal assimilation by the body.

In addition to reducing vulnerability to stress, taurine, a nutraceutical cofactor of magnesium supplementation, and vitamin B6 facilitate the incorporation of magnesium into the cells. Vitamin B5, sometimes called the "anti-stress vitamin", also acts in the response and resistance to stress.

PHYSIOMANCE Relax Booster is a soluble and easy to ingest form for an immediate booster effect against stress.

PHYSIOMANCE Relax is an innovative association of 6 bio-actives and micronutrients which provides for 3 tablets : 300 mg of magnesium in citrate form, 150 mg of taurine, 150 mg of rutin extracted from Sophora japonica, 50 mg of OPC (ProanthoCyanidolic Oligomers), 60 mg of bacopa titrated in bacosides, as well as 100% of the RI in vitamins B3, B6, B9 and B12.

The vitamins are involved at the level of the energy metabolism while contributing to the normal functioning of the nervous system. They also contribute to reduce fatigue. For an optimal efficiency, the vitamins B6, B9 and B12 present in PHYSIOMANCE Relax are in coenzyme forms and cover 100% of the RI.

To reinforce the neuroprotective and anxiolytic action, the THERASCIENCE Laboratory added bacopa titrated in bacosides, and two polyphenols : rutin and grape OPC.2-3 Bacopa helps to relieve and prevent stress while improving concentration and intellectual performance. It also helps to reduce the level of cortisol, a hormone involved in the vicious circle of stress.

Always associated, the vitamin B6, the citrate of magnesium and the taurine allow to benefit from all the benefits of magnesium to fight against stress.

And to preserve your nervous and muscular balance while reducing fatigue, PHYSIOMANCE Magnésium B6+ provides 150 mg of magnesium, essentially in glycerophosphate form, and 100% of the RI in vitamin B6. 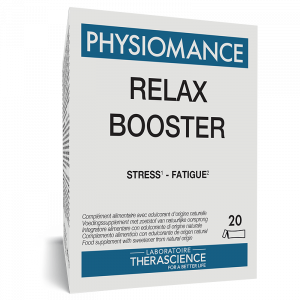 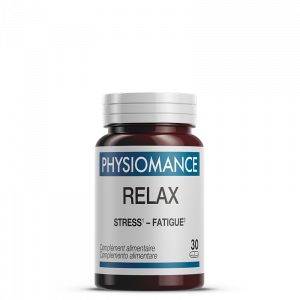 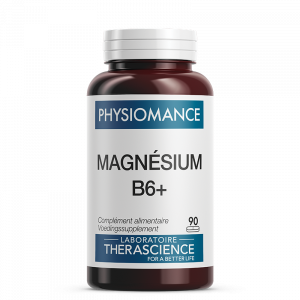