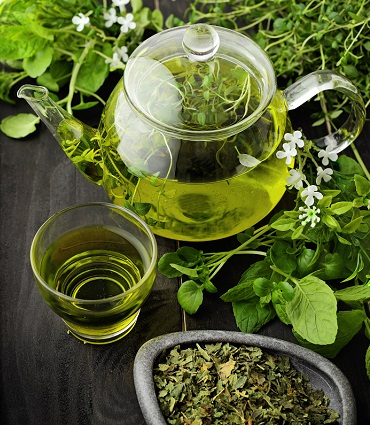 Part of the plant used:

Traditional drink in China for more than 4,000 years, tea appeared in Europe in the 17th century. Fermentation allows the transformation of the green tea leaf into black tea, modifying its composition in the process.

Green tea is an unfermented tea, six times richer in catechins than black tea, both types of tea being from the same plant, Camellia sinensis. Catechins, which are part of the flavonoid family, are the molecules responsible for the antioxidant activity of green tea. Epigallocatechin gallate (EGCG) is the main compound of catechins. It has an antioxidant effect and is responsible for the cardioprotective activity conferred by green tea. Moreover, EGCG would also be involved in the reduction of the risk of type 2 diabetes and the fight against insulin resistance.

The many benefits of green tea are due to the great diversity of its active ingredients. Among these, theanine is a molecule that also seems to be interesting. It is studied in the laboratory for its potential effects on the nervous and immune systems.

The wide range of active ingredients in green tea also includes tannins, polyphenols and methylxanthines, such as caffeine, theine, theophylline and theobromine.

The tannins in green tea are responsible for its anti-inflammatory and antimicrobial effects. Green tea also reduces the level of "bad cholesterol" (LDL) in the blood. It protects DNA and blood vessel walls and is also neuroprotective.

Green tea has many properties.

At the cardiovascular level, it helps to maintain a healthy heart, to keep a healthy cholesterol level, while controlling the metabolism of fats. Green tea helps protect the insulin-secreting glands and maintain normal blood sugar levels.

Unanimously recognized for its antioxidant powers, green tea has a protective effect against the harmful effects of free radicals on the skin, ovaries and breasts in women, and the prostate in men.

Green tea helps to feel more energetic and contributes to resistance against physical and mental fatigue. At the level of the central nervous system, it acts as a relaxant and promotes natural sleep.

Green tea is traditionally used for slimming as a complement to dietary measures and contributes to the elimination of water.

At the oral level, tea helps to reduce dental plaque and the production of acids by the bacteria present in the mouth.

Our products based on Green tea