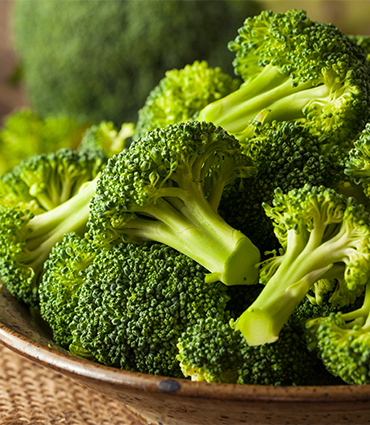 Originally from southern Italy, broccoli is a vegetable that belongs to the Brassicaceae family, formerly known as crucifers. It can be eaten raw or cooked. However, its health benefits are optimized when broccoli is only slightly cooked.

In addition to vitamins (A, B1, B2, B3, B6, C and K), minerals, including potassium (293 mg / 100 g), broccoli contains several carotenoids, including lutein and zeaxanthin (1080 µg / 100 g), two compounds with antioxidant properties, these two molecules being involved in protecting the retina.

Like all members of the Brassicaceae family, broccoli also has a high content of sulphur compounds: glucosinolates (of which glucoraphanes are a part) and their hydrolysis product, isothiocyanates (of which sulforaphanes are a part). Broccoli is the cruciferous vegetable that contains the most sulforaphanes, which makes it a health food of choice.

These sulphur compounds have multiple properties. In particular, they act as antioxidants, thus helping to combat cellular stress. They are also involved in modulating the expression of phase II enzymes involved in the liver detoxification process. These enzymes are useful in neutralizing potentially toxic molecules. This is particularly the case for pesticide residues found in food, but also for alcohol and pollutants such as volatile organic compounds or tobacco.

Broccoli is also known for its anti-cancer properties, thanks to its effects on inducing the death of cancer cells (apoptosis) and protecting DNA.

Furthermore, isothiocyanates have anti-inflammatory activity. Sulforaphane is said to have bactericidal and bacteriostatic properties that limit the proliferation of the pathogenic bacterium Helicobacter pylori.

The presence of isothiocyanates, and more particularly sulforaphanes, contained in broccoli, gives this vegetable of the Brassicaceae family antioxidant, anti-inflammatory and cell-protecting properties.

The THERASCIENCE Laboratory uses a patented Sulfodyne® broccoli seed extract. This extract is standardized and stabilized in sulforaphane. It has a high bioavailability in order to get all the benefits of broccoli.

Our products based on Broccoli