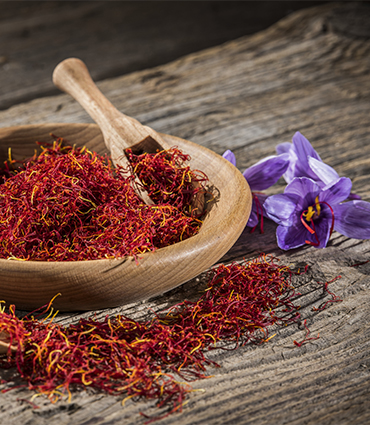 Saffron, for many decades the most expensive spice in the world, originated in the Middle East. It was first cultivated in the Greek provinces by the ancient Minoan civilisation (Crete, Aegean Sea), and is believed to have been imported to Europe by the Knights Templar. Saffron is characterized by a bitter taste and a fragrance similar to iodoform or hay, caused by picrocrocine and safranal. It also contains a carotenoid, crocin, which gives a yellow-gold tone to dishes containing saffron. While these characteristics make saffron a highly prized ingredient in many culinary specialities around the world, particularly in Persian cuisine, it is important to note that the plant also has medicinal applications.

The high price of saffron is due to the difficulties inherent in its extraction, which is done manually. Picking a large number of small stigmas, the only part of the flower that has the desired colouring and aromatic properties, is extremely delicate. Moreover, a very large number of flowers must be processed to finally obtain a commercial quantity of saffron. One pound of dry saffron (0.45 kg) requires the harvesting of nearly 50,000 flowers, which is equivalent to the surface area of a football field. Thus, nearly 75,000 flowers would be needed to produce one pound of saffron. The flowers themselves and their short flowering period make the operation even more complex and demanding. The 150,000 flowers needed to obtain 1 kg of dry saffron require nearly 400 hours of intense work. In Kashmir, for example, thousands of growers have to work around the clock for one to two weeks.

Saffron contains more than 150 compounds, many of them carotenoids, including zeaxanthin, lycopene, and α- and β-carotenes.

The saffron extracts used by the THERASCIENCE Laboratory are derived from an innovative patented biotechnology, Safr'Inside™, which guarantees the quality and optimal effectiveness of the extracts.

Our products based on Saffron