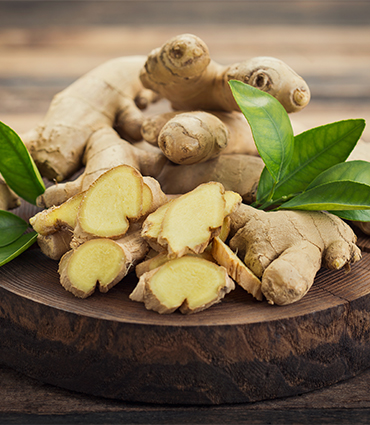 Part of the plant used

Ginger is a plant of the Zingiberaceae family, which has many health benefits.

Its rhizome is used in phytotherapy. It is composed of phenolic acids, proteins, lipids and enzymes such as zingibaine. Ginger contains vitamins A and B, as well as minerals (phosphorus, magnesium, sodium, iron, calcium). It consists of a characteristic oleoresin, its pungent flavor, and gingerols, shogaols and gingerenones.

Ginger is also used for its essential oil rich (30 to 70%) in sesquiterpenes (zingiberene, β-sesquiphellandrene and arcurcumene) and monoterpenes (camphene). Sesquiterpenes are at the origin of the decongestant, veno-lymphatic, anti-allergic, anti-inflammatory, calming and hypotensive activity of ginger essential oil.

The ginger rhizome is known for its antiemetic properties, making it an ally in the prevention of motion sickness and in the fight against nausea and vomiting in pregnant women. Ginger has analgesic, anti-inflammatory, immunostimulant and antioxidant properties. Through its influence on blood circulation, it also helps to prevent cardiovascular disorders. This recognized gastroprotective agent is used for its hepatoprotective, nephroprotective and digestive action. Ginger also acts as an antibacterial against Helicobacter pylori and Staphylococcus aureus, as an antiviral against the herpes and flu virus, and as a fungicide.

Our products based on Ginger