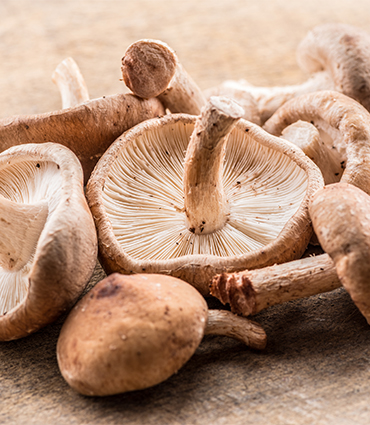 Shiitake is the second most cultivated mushroom in the world, and for good reason: in Asia, shiitake is considered the « elixir of life » because of its many health benefits.

This mushroom of the Marasmiaceae family, contains polysaccharides, and more particularly β-glucans, including lentinan, which make up the membranes of its cells.

Lentinan, a polysaccharide of shiitake, is considered an immunostimulant. Indeed, the β-glucans (glucose polymers) stimulate the production of immune system cells by attaching to their membranes. This is particularly the case for NK (Natural Killer) cells responsible for eliminating cancerous cells or cells infected by viruses. These cells are also capable of secreting cytokines, which are chemical mediators. The cytokines in turn stimulate B-lymphocytes (antibody producers) and T-lymphocytes, the cells of specific immunity.

In addition, the immunostimulating effect of β-glucans activates macrophages, thus stimulating phagocytosis, a cellular mechanism that leads to the elimination of pathogens and cellular debris.

Furthermore, thanks to its sterols and the β-glucans, shiitake also has an effect on lowering bad cholesterol (LDL), thus preventing the risk of cardiovascular disease.

The β-glucans reduce the presence of free radicals responsible for oxidative stress and are therefore considered antioxidants.

Our products based on Shiitake