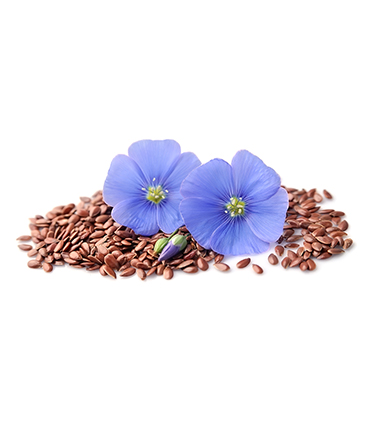 Flax has been used in textiles for more than 4,000 years and is also used in food.

This herbaceous plant is used for its seeds from which an oil rich in unsaturated fatty acids is extracted. It contains 20% omega-6, including linoleic acid, and 55% alpha-linolenic acid (ALA), the leading omega-3.

Omega-3s help to increase the level of "good" cholesterol (HDL), thus promoting the proper functioning of the cardiovascular system. In addition, alpha-linolenic acid can be metabolised into EPA (eicosapentaenoic acid) and DHA (docosahexaenoic acid), thus participating in the production of anti-inflammatory molecules.

In addition, flax seeds contain plant substances called mucilage. These soluble fibres, made up of branched polysaccharides, have a strong capacity to capture water and swell on contact with it, thus favouring intestinal transit.

For more information, click on ALA, EPA and DHA

Linseed oil is the object of more than 2054 scientific publications.

Our products based on Linseed oil