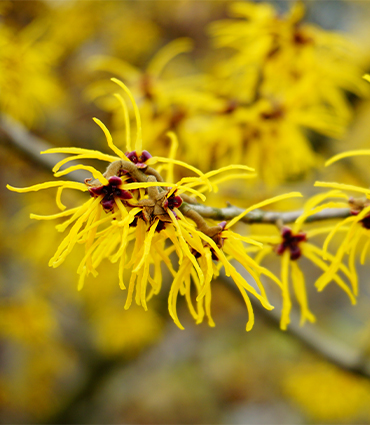 The poetic name « Golden Spider Tree », derived from its bouquets of yellow flowers, gives the witch hazel a wonderful touch that is particularly suited to its astonishing properties. The leaves and bark of this tree, which can grow up to 7 metres high, contain polyphenols, including hydrolysable tannins such as witch hazel, as well as proanthocyanidols.

Beneficial to health, its tannins and polyphenols give witch hazel antioxidant, anti-inflammatory, vascular endothelium-protective and vasoconstrictive properties. It also has a bacteriostatic effect on gram-negative bacteria and an antiviral effect. The use of witch hazel leaves is also beneficial in cases of hemorrhoids.

Thanks to the astringent and tonic effects of the tannins, witch hazel can be useful in the prevention of various cardiovascular disorders. It can also be useful in combating circulation problems thanks to its vasoconstrictive effect. Witch hazel is used in cases of capillary fragility but also in cases of venous insufficiency because it favours blood microcirculation and reduces the sensation of heavy legs.

Witch hazel contributes to good blood circulation , especially around the eyes. It is also used in case of irritation or eye discomforts caused by sustained visual efforts, sea or swimming pool baths or by a smoky atmosphere.

Our products based on Witch-hazel