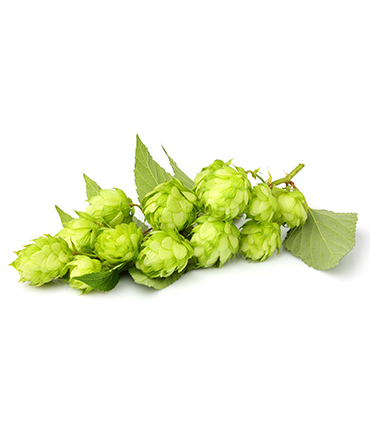 Part of the plant used:

This herbaceous plant is not only used to produce beer! With all due respect to zythologists (« beer oenologists », experts in brewing and taste tuning), it is also used in phytotherapy. Its female flowers (especially the cones) are covered with an odorous, powdery substance called lupulin, which gives beer its bitterness, but above all it is said to have calming properties that promote sleep.

Rich in flavonoids (rutoside, astragaloside, chalcones and quercitroside), the plant also contains an essence composed of monoterpenes, monoterpenols and sesquiterpenes.

The hop is particularly indicated in the fight against menopausal disorders, especially hot flushes. It has oestrogen-like, sedative and analgesic properties.

Traditionally used in menopausal women, hops help to support associated signs such as hot flushes, anxiety, agitation, but also irritability and mood disorders. The presence of humulone allows the modulation of GABA inhibitory receptors and a calming of the nervous system, thus promoting sleep.

Our products based on Hop