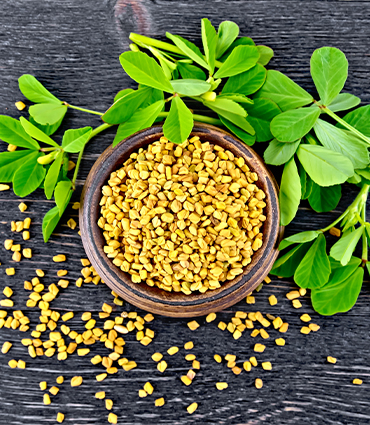 Fenugreek was known as early as the second millennium B.C., and was a herbaceous plant of the Fabaceae family, whose use spread rapidly. Among the Egyptians, fenugreek was used in preparations to beautify the skin thanks to its softening properties.

Even Hippocrates of Kos, considered the father of medicine, praised it in the 5th century BC. However, it was not until the Middle Ages that knowledge of the medical effects of this plant was sufficiently developed for fenugreek to make its entry into the pharmaceutical codex in 12th century France.

Used in phytotherapy, fenugreek seeds contain 30% protein, but also carbohydrates, flavonoids such as vitexin, sterols and mucilages, including galactomannan.

It is traditionally used for its anti-diabetic and anti-hyperlipidemic, anti-obesity, anti-inflammatory, antioxidant, antifungal and antibacterial effects.

Its seeds are involved in the regulation of blood sugar levels. In vitro, a study has shown that fenugreek leads to an increase in insulin secretion and a decrease in blood glucose concentration while inhibiting the absorption of glucose by the intestine.

It is also reputed to be galactogenic (which causes or increases milk secretion), to firm up the breasts and to participate in the fight against hair loss. In addition, fenugreek contributes to improving the libido in men.

It stimulates the appetite and has a reputation for improving weight gain, thanks in particular to the presence of steroid saponosides.

Contributing to the maintenance of normal glucose and insulin metabolism, fenugreek seeds are used in phytotherapy for their anti-diabetic properties.

They also promote appetite and digestion while contributing to the balance of lipid metabolism.

The galactomannan fibres of fenugreek are involved in the microencapsulation of the active ingredients of turmeric (Curcuma longa L.) present in the patented Curcussentiel® complex.

In this form, curcumin is 270 times more bioavailable than a standard extract, the highest bioavailability of curcumin on the market. Thanks to this combination, curcumin is better absorbed and helps promote digestion and digestive comfort while providing an anti-inflammatory action.

Our products based on Fenugreek