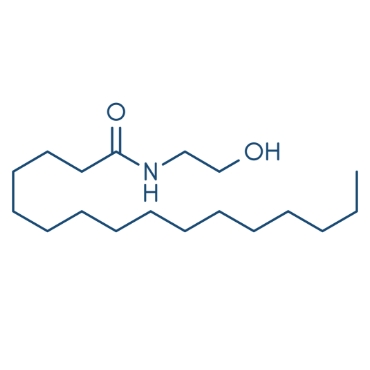 Palmitoylethanolamide (PEA) is a long carbon chain molecule that combines a fatty acid, palmitic acid, with an ethanolamine group. PEA is naturally produced by the body but its synthesis decreases with age. And if this molecule is present in food (soya, maize, egg yolk or even in mother's milk), it is only in small quantities, hence the interest in supplementation.

PEA belongs to the family of N-acylethanolamines, which includes the main representative of endocannabinoids: anandamide. Endocannabinoids bind to receptors of the same name and are involved in the regulation of pain and relaxation.

PEA is an endocannabinoid-like: it does not bind directly to endocannabinoid receptors, but acts as a mediator. Palmitoylethanolamide participates in the biological response to endogenous cannabinoids (cannabinoids produced by the body, called endocannabinoids) and prevents their degradation, thus prolonging their action against pain.

Phytocannabinoids, i.e. cannabinoids produced by plants, such as THC, are also known to act against pain. However, these molecules are criticized for their psychotropic effects, which is not the case for endocannabinoids or PEA.

PEA has anti-inflammatory and analgesic effects. This is why this molecule is particularly interesting in cases of (chronic or acute) pain and inflammation. In addition, PEA is able to cross the blood-brain barrier and therefore act in the brain.1

Although it is not possible to make regulatory claims for PEA because the European Food Safety Agency (EFSA) has not yet evaluated the scientific data, numerous studies have been carried out on this molecule as early as 1970. According to scientific research, PEA is involved in the regulation of inflammation and the endocannabinoid system, as well as in tissue repair and modulating pain perception.

PEA belongs to the category of lipids and has a long carbon chain making it insoluble in aqueous media. This hydrophobic character is responsible for its difficult absorption and considerably reduces its bioavailability.

This is why THERASCIENCE Laboratory has selected PEA Levagen®+ : it benefits from the advanced LipiSperse® technology, which facilitates the dispersion of PEA in the stomach and ensures optimal bioavailability.

A double-blind study of 28 patients over 24 hours demonstrated that the group supplemented with 300 mg of Levagen®+ PEA had plasma PEA concentrations 1.75 times higher than the group receiving standard PEA, demonstrating the superior bioavailability of PEA Levagen®+.

PEA is the subject of more than 983 scientific publications.

Our products based on PEA (palmitoylethanolamide)