Difficulty falling asleep? Restless night? Waking up at night or too early? Can't get back to sleep? Find peaceful sleep at last !

To fall quickly into the arms of Morpheus, what a joy after a long day!

However, the promise of a restful night can quickly turn into a nightmare... The list of inconveniences that punctuate restless nights becomes a ritual.

At 11 p.m., the difficulties of falling asleep make their entrance. After turning over a few times, the irritation starts to make itself felt. At half past midnight, sleep takes us away. But not for very long. At 2am, we wake up in a panic. After 45 minutes of agitation, and after a pillow turned over at least 5 or 6 times, we finally go back to sleep. At 4.20am, an early wake-up call. Sitting on the bed, with your back against the pillow and the light often on, the sleep that has become so fragile is disorganised and no longer fulfils its main function: rest. At 6 o'clock, the alarm clock rings. Tired, exhausted, a new day has to be faced. There is only one certainty: the anxiety of spending a bad night that resembles the previous one increases and sleep becomes a distant memory.

It is no longer time to count sheep to fall asleep... Take action ! When the biological clock goes out of kilter, it must be re-synchronised as a matter of urgency. It is also known that travelling across more than 3 time zones can lead to jet lag and delayed sleep.

The sleep cycleSleep is broken down into cycles and each night corresponds to a succession of 4 to 5 cycles. Each cycle lasts between 90 and 110 minutes and is organised into two main phases that alternate:

During the slow wave sleep phase, the brain rests and the body slows down. Mental activity is very low, vital functions such as heart rate and breathing are low. The body temperature also decreases.

It is during this phase that dreams are generated. Brain activity is very intense. The muscles of the upper and lower limbs are paralysed, with the exception of those controlling eye movement. Because of this, REM sleep is also called « Rapid Eye Movement », referring to the rapid eye movements during dreams. REM sleep is also involved in the consolidation of procedural memory, involving motor skills and automatisms, as well as declarative memory, which is related to concepts and events. Although REM sleep represents about 25% of sleep time, its duration decreases with age. 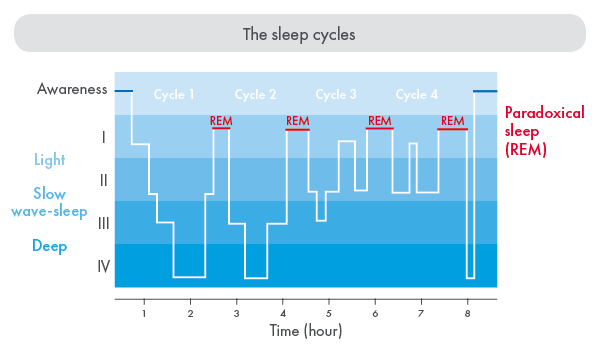 Insomnia is not unique and can take several forms. The different types of insomnia are classified according to the different characteristics they take on and include: difficulties in falling asleep, night-time awakenings, early awakenings and are accompanied by feelings of non-restorative sleep.

In case of insomnia, the quality of sleep is altered. The different types of insomnia are most often related to factors that disturb the onset or maintenance of sleep.

One of the main causes of difficulties in falling asleep, also known as insomnia of sleep, corresponds to the de-synchronisation of the internal biological clock with the natural luminosity linked to the circadian rhythm (day/night alternation). This is known as phase delay or delayed sleep phase disorder. Indeed, the entry into a sleep state can be delayed by 1 to 2 cycles, and thus by at least two hours up to more than four hours.

Exposure to blue light from screens, but also anxiety, drinking caffeinated beverages, exercising in the evening or working at night and jet lag due to travel cause difficulties in falling asleep.

As a result, bedtime and wakefulness occur with falling asleep around 3 a.m and waking up from 10 a.m. Although it is impossible for these people to fall asleep earlier, waking up early, for example at 6am for work, is often complicated and leads to shortened sleep.

When falling asleep is normal but waking up during the night or earlier than expected (early waking) without being able to fall back asleep easily, this is called sleep maintenance insomnia. It is also possible that night-time awakenings occur more frequently during the night. Chronic insomnia is said to occur when difficulties in falling asleep and/or waking up at night occur more than 3 times a week for at least 3 months.

As mentioned earlier, sleep is a state of decreased consciousness that separates two periods of wakefulness. It is divided into cycles and alternates mainly between light and deep slow wave sleep.

While during the first cycles, deep sleep occupies the majority of the time, the likelihood of 'reconnecting' with the outside world is lower. However, over the course of the night, the time spent in the deep sleep phase decreases and light sleep increases. It is then more likely that nocturnal awakenings will occur at the end of the night during the light sleep phases (or REM sleep), which is a more favourable time to exit the sleep state.

Chronic insomnia is said to occur when difficulties in falling asleep and/or waking up at night occur more than 3 times a week for at least 3 months.

In people suffering from chronic insomnia, we speak of "hyper-arousal" characterised by a significant, even excessive, and continuous activation of the central nervous system and of the system in charge of the response to stress (the hypothalamic-pituitary-adrenal axis) 1. This then makes it difficult to switch to a state of sleep. Moreover, when sleep is finally achieved, it remains in a phase of light slow wave sleep, which is more prone to night-time awakenings.

Similarly, in these people, the brain activity of neurons with GABA (gamma-aminobutyric acid) receptors is reduced in the cortex. As GABA is a neurotransmitter with an inhibitory action on the central nervous system, this also explains the cause of the maintenance of wakefulness.

Difficulty in falling asleep and sleep maintenance insomnia cause a decrease in sleep time. The sleep is insufficient on the one hand, and of poorer quality on the other, so that it becomes non-restorative due to the reduced proportion of deep sleep phases during the cycles.

After a bad night, fatigue is often felt. This is often accompanied by daytime sleepiness, which can lead to falling asleep during the day.

Moreover, since sleep is an essential factor, its deprivation or decline in quality can have a direct impact on learning, memory and concentration. It is therefore never a good idea to let insomnia set in.

Melatonin, the key to falling asleep

Melatonin is produced by the pineal gland, in the centre of the brain, from an amino acid: tryptophan. Also called the "sleep hormone", melatonin is only synthesised in the absence of light.

Its production increases at around 8 p.m. with the decrease in light, and reaches its maximum at around 3 a.m. Thereafter, its concentration in the blood gradually decreases during the day.

However, prolonged use of phones and tablets, which are sources of blue light, can delay melatonin synthesis. To make it easier to fall asleep, a few simple tips can be applied, such as avoiding screens before going to bed, reading a good book, preparing an herbal tea and above all relaxing.

The THERASCIENCE Laboratory has developed a complete range to combat insomnia, without the risk of addiction or dependence.

For immediate action, Physiomance Somny spray, an easy-to-use oral spray, provides ultra-fast action thanks to the addition of 1.8 mg of melatonin for 2 sprays. The action of melatonin is reinforced by the presence of lemon balm, a plant with calming properties, and vitamins B6 and B12, which contribute to the normal functioning of the nervous system and normal psychological functions. Physiomance Somny spray is always at hand on the bedside table and helps to quickly reduce the time to sleep and fatigue. Its rapid action is also particularly useful in combating insomnia caused by jet lag.

The THERASCIENCE Laboratory has developed Physiomance Sommeil LP, bi-layer tablets composed of a white part for a rapid action and a blue part contributing to the prolonged release of the active ingredients in order to regain quality sleep and help reduce fatigue.

For a fast action, the melatonin (sleep hormone) and magnesium contained in the white part of the tablets are released as soon as Physiomance Sommeil LP is taken, in order to quickly reduce the time to fall asleep.

THERASCIENCE Laboratory uses SEPISMART™ SR technology in the blue part of its Physiomance Sommeil LP tablets for a prolonged release of eschscholtzia (California poppy), vitamins B6 and B12, as well as the other part of the magnesium and melatonin in order to act throughout the night and limit nocturnal and morning awakenings, while helping to reduce fatigue.

While eschscholtzia improves the quality of natural sleep and promotes optimal relaxation, magnesium and vitamins B6 and B12 help to reduce fatigue and support the normal functioning of the nervous system and psychological functions.

For optimal bioavailability, vitamins B6 and B12 are present in their coenzyme form and magnesium in citrate form.

Combining acacia gum, which gives the tablet optimal hardness, and xanthan gum, specially selected for its viscosity properties, SEPISMART™ SR is a naturally derived technology, containing gums extracted by environmentally friendly processes, without the use of solvents, without GMOs, without additives.

On contact with water, SEPISMART ™ SR technology hydrates, swells and forms a hydrophilic matrix around the blue tablet, allowing a continuous and prolonged release of melatonin and magnesium.

Thus, the two layers of the Physiomance Sommeil LP tablet present a complementary action: one allows an instantaneous release of melatonin for a quick fall asleep, the other a prolonged and continuous release as the night goes on in order to benefit from the active ingredients to avoid night-time awakenings.

No more bedtime stress, no more waking up at night and no more anxiety about not being able to fall asleep! 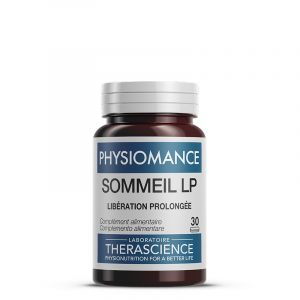