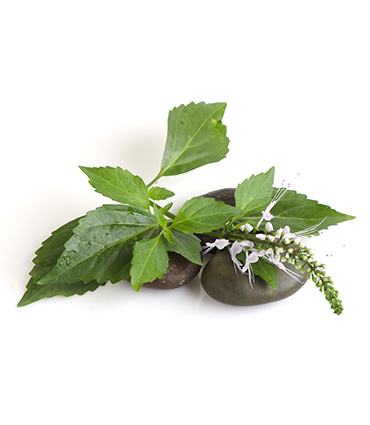 Growing in tropical and subtropical regions, in humid areas, along rivers and marshes, this plant of the Lamiaceae family has however a preference for Southeast Asia, particularly Malaysia and Java. Its pretty name of "cat's whiskers" comes from its white or lilac flowers, with a corolla with 4 prominent, filiform stamens up to 3 cm long.

Used in phytotherapy, the leaves of the orthosiphon are composed of caffeic acid derivatives such as rosmarinic acid and lithospermic acid. They also contain flavonoids (eupatorine, salvigenin), tannins (5 to 6%) and potassium salts.

Orthosiphon has been used for centuries in Ayurvedic medicine for its beneficial effects in the treatment of urinary tract infections.

It is also used as a diuretic in cases of water retention, oedema and kidney failure, as well as in cases of bladder inflammation.

In vitro studies have shown that orthosiphon has a non-stick effect on the bladder against the uropathogenic E. coli bacteria. In addition to its diuretic effect, orthosiphon is also useful in the prevention of urinary tract infections caused by E. coli.

It also has nephroprotective properties. Orthosiphon also has recognised hepatobiliary properties as it stimulates the secretion of bile by the liver (choleretic effect) and facilitates the evacuation of the latter towards the gall bladder (cholalogue effect).

The orthosiphon is traditionally used in urological indications because it stimulates the drainage of the urinary tract and facilitates the renal elimination of water. It also contributes to weight loss as part of a diet and in addition to dietary measures.

Our products based on Ortosiphon